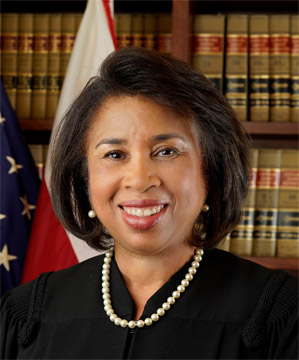 Chief Judge Blackburne-Rigsby chaired the District of Columbia Courts’ Standing Committee on Fairness and Access, and served on the District of Columbia’s Access to Justice Commission. Chief Judge Blackburne-Rigsby was the Chair and Moderator of the National Consortium on Racial and Ethnic Fairness in the Courts and is the Past President of the National Association of Women Judges (NAWJ) for the 2013 - 2014 term.

Chief Judge Blackburne-Rigsby graduated from Duke University with a Bachelor of Arts degree in Political Science, and received the Duke University Presidential Leadership Award. Following graduation from Duke University, she was selected to be one of twelve Public Affairs Fellows of the Coro Foundation in San Francisco, California. She earned her law degree from Howard University School of Law, graduating in the top five percent of her class. While in law school, she served as the Lead Articles Editor of the Howard Law Journal and served as the Co-Captain for the Charles Hamilton Houston Moot Court Team.

Following law school, Chief Judge Blackburne-Rigsby was an associate at the law firm of Hogan Lovells US LLP (formerly Hogan and Hartson) in Washington, DC, where she litigated commercial, real estate, employment discrimination, and education matters before state and federal courts and administrative agencies. Chief Judge Blackburne-Rigsby later joined the District of Columbia Office of the Corporation Counsel (now the District of Columbia Office of the Attorney General), where she served as Special Counsel to the Corporation Counsel, working as part of the senior management team. She then served as Deputy Corporation Counsel in charge of the Family Services Division, where she managed the Division’s 65 attorneys and support staff, responsible for handling child abuse and neglect, child support enforcement, and domestic violence cases.